Congratulations to Sean Burke, our November FOM Winner with a 15.5 lb. Lingcod aboard Encounter.

Sean Burke is our October Fish of the Month Winner with a 24.8 lb Lingcod. Nice catch!

-This announcement was delayed because another member was reporting a catch, but no weigh slip was available, or reported to the Weighmaster. A weigh slip was produced on 11/10/18 and the fish was less than Sean Burke’s 24.8 Ling. 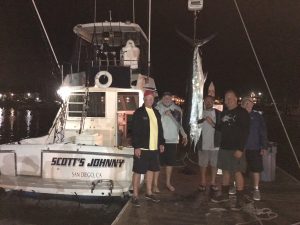 I would also like to Congratulate Captain Mike Bratton and Crew of “SCOTTS JOHNNY” – Jeff Behr, Jeff Steinhardt, Clayton Dumsdorf, and Dan Bailey on their Captured Marlin 130.6 lbs. and another successful Released Marlin. Although the fish could not be entered do to a time constraint – it was an impressive feat, both fish fought by angler Jeff Behr and is the current Fish of the Month Leader.

Special Thanks to Jeff Behr for Donating the $500 Cash Prize for the Tuna Division.

3rd Prize winner by drawing was to Captain R. David Verdoo and Carolyn Verdoo aboard “R-MOL-LYN” of  “SWYC”